A glimpse into the practices that will be explored on the Mindfulness Association’s Engaged Mindfulness course led by Kristine Mackenzie and Fay Adams in Samye Ling, starting in January 2018

Those who have completed the Mindfulness Practitioner training will be familiar with the concept of grounding. The first stage of grounding is about dropping into the body, which is held by the earth. For many years it never occurred to me that this experience could be deepened, that it wasn’t just something you touch into as a foundation for working with the mindfulness support. Then I tried a practice called Earth Descent (led by Reggie Ray) and I was stunned by an experience of grounding that could only be described as grounding multiplied by a hundred! I realised we can drop our awareness down into the earth itself. This might sound like a strange concept – surely it’s impossible to drop into the earth! However we work with our imagination here. We imagine that our awareness keeps dropping down further and further down. Whereas in basic grounding you feel like a mountain, now you feel like a mountain with a huge foundation merging into the deep, wide and vast expanse of planet earth. This feels to me like a very primordial experience, there’s a sense of reconnecting with an ancient affinity or even unity, with the earth, my home. It can almost feel like I become earth, strange as this may sound. 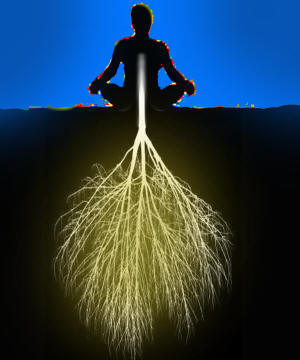 It can help if we remember a fundamental truth which indigenous societies knew well, but which much of humanity in the contemporary world seems to have forgotten. Human beings are born – are children – of the earth; the archetype of Mother Earth is found in original cultures on every continent.

There is a Native American saying which says: ‘’The earth does not belong to us, we belong to the earth’’. A different orientation is required to go from thinking we have dominion over the earth, to feeling our belonging as one small manifestation of the vastness of life on earth! How different does this feel in the body?

It’s only relatively recent that human beings live without an awareness of the inter-dependence with the earth as a sacred reality. The level of disconnection from the beauty, intelligence and formidableness of nature is acute in the modern world. How else would human beings be able to be so destructive of the earth? We see the earth as something we can dredge, use and manipulate, rather than relating to her with wonder, awe and devotion and working in submission to her laws of balance. So, these practices are a way of beginning to heal the earth by healing our experiential disconnectedness from her. We are reminded that we are more than individuals in bubbles; we are tiny, tiny life forms amongst the teaming, diverse grandeur of life on earth. If we deeply feel that we are the earth, then we will not exploit our planet and instead we will naturally want to tend, serve and love Mother Earth as an expression of our humanity.

Practicing Earth Descent has, for me, been a way to naturally find this earth connection. It has felt like experientially finding my umbilical cord back to the earth, like coming home to a home I didn’t know I was missing. My heart and body feel more embedded in the interdependence of life supported by our majestic planet. The unexpected response to this is spontaneous love.