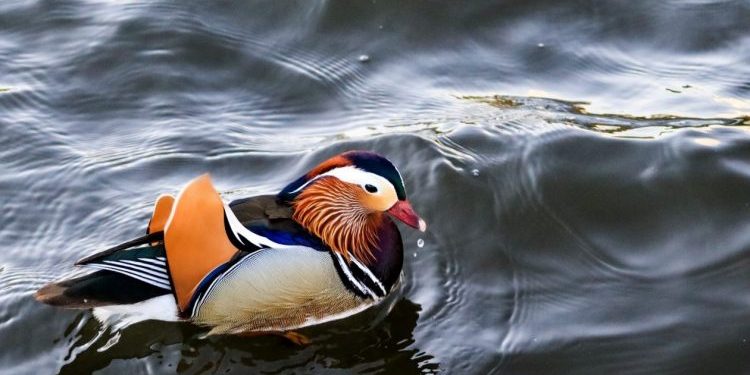 Now we’re ready to look at something pretty special.
It is a duck,
riding the ocean a hundred feet beyond the surf.
No it isn’t a gull.
A gull always has a raucous touch about him.
This is some sort of duck,
and he cuddles in the swells.

He isn’t cold,
and he is thinking things over.
There is a big heaving in the Atlantic,
and he is a part of it.

He looks a bit like a mandarin,
or the Lord Buddha meditating under the Bo tree.

But he has hardly enough above the eyes
to be a philosopher.
He has poise, however,
which is what philosophers must have.

Probably he doesn’t know how large the ocean is.
And neither do you.
But he realizes it.

And what does he do, I ask you?
He sits down in it!
He reposes in the immediate as if it were infinity
– which it is.
He has made himself a part of the boundless
by easing himself into just where it touches him.

I like the duck.
He doesn’t know much,
but if only I could listen
He teaches me all I need to know.

A sweet poem with hidden depths is this one I think, written in 1947 by Donald C. Babcock, the professor of Philosophy at the University of New Hampshire who was also a poet and a minister. He died in 1986 at the ripe old age of 100, and he brought a number of books and poetry collections into the world. The poem was sent to me as you see it here, but looking online I realised that the original has a slightly different ending, mentioning religion (which is of course fair enough as a minister, but I have a preference for this one! You can find the original here if you’re curious).

So, resting on the heaving waves, poised and present. Plenty of waves to practice with, and what a helpful image to remember how to meet them… like a little duck!

Photo by Goke Obasa on Unsplash 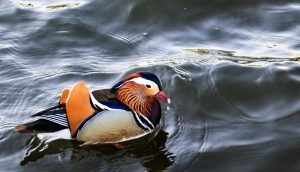